Coalition, 120,000+ Supporters Band Together to Improve the Certified Organic Label 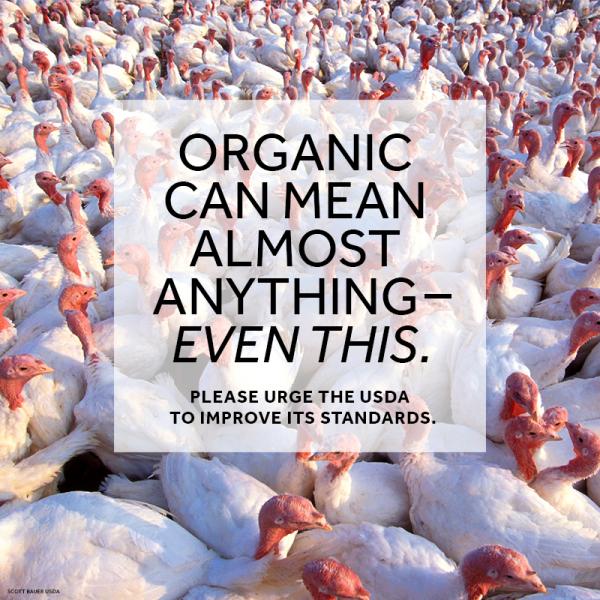 Washington, DC—A coalition of animal, environmental, and consumer protection organizations submitted a joint comment today to the U.S. Department of Agriculture (USDA) on its proposed rule to amend animal welfare requirements under the Certified Organic label. In addition, the coalition gathered more than 120,000 comments from its supporters who want to see a stronger organic program.

The coalition commends the department for its long-awaited efforts, and believes the proposed rule will ensure a more transparent and consistent organic program.According to the coalition, the USDA’s proposed rule is desperately needed to establish a clear, uniform standard of care for organically raised animals and to provide consumers with a more reliable label.  “Under the proposed rule, animals raised organically will have enrichments, more meaningful outdoor access, and the opportunity to live more natural lives,” said the coalition in a joint statement. “While the proposed rule will not create a perfect organic program, it will create the first comprehensive federal standards for the raising of farmed animals, and that in itself is a significant win for animals and consumers. Thus, we encourage the USDA to finalize the rule expeditiously.”

The new rule aims to fill gaps in the current rules, which were first enacted in 2001. Under the current regulations, there are paltry standards for animal welfare, allowing for inconsistencies in the quality of care among producers of organic animal products. For instance, animals at some organic farms are raised on pasture, while those at other organic facilities are raised indoors under conditions nearly indistinguishable from their conventional counterparts. This inconsistency leaves the organic label ripe for misuse—allowing for consumer confusion and misleading claims.

While the coalition urges the USDA to finalize the proposed rule, it identifies key areas where the USDA should improve its proposed standards. Specifically, the organizations are asking that the USDA require

As stated in the coalition’s comment, these changes would “increase both animal welfare and uniformity and bring the standards more in line with consumer expectations.”

Comments on the proposed rules are being accepted until July 13 and can be submitted online. For more information, visit https://www.regulations.gov/document?D=AMS-NOP-15-0012-0001.