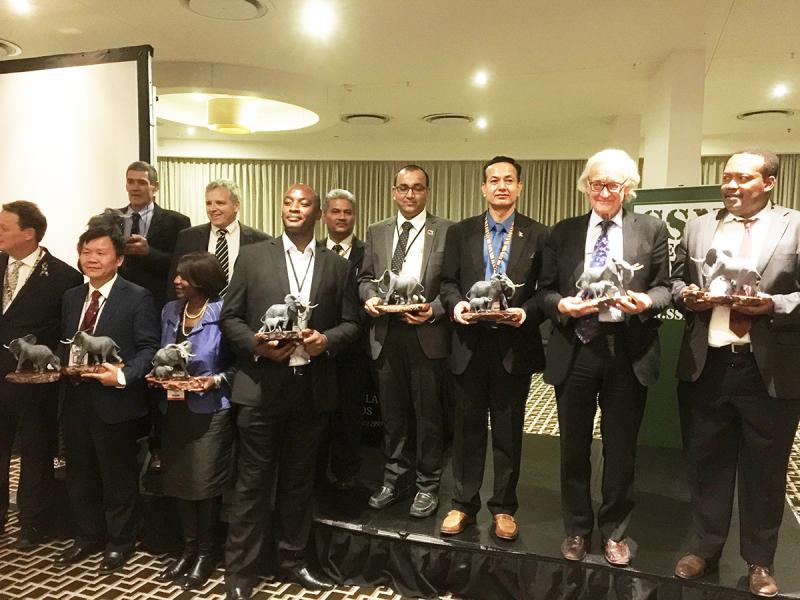 JOHANNESBURG—Wildlife law enforcement champions from nine countries were recognized today with the Clark R. Bavin Wildlife Law Enforcement Award at the 17th Conference of the Parties (CoP) of the Convention on International Trade in Endangered Species of Wild Fauna and Flora (CITES) in Johannesburg, South Africa.

“Through stellar efforts to combat wildlife crime,” stated Cathy Liss, AWI president, “these award recipients have demonstrated a dedication to wildlife protection, which should be an example to all who cherish the biodiversity on this planet and who are committed to justice against wildlife criminals who illegally capture and kill wildlife out of greed and callousness.”

Since 1997, 96 individuals and/or agencies from 30 countries have received the Clark R. Bavin Wildlife Law Enforcement Award, which is only presented at a CITES CoPs. Nearly 40 individuals, including 12 who were recognized this year, have received the award posthumously after they made the ultimate sacrifice to protect wildlife.

The award, presented at a reception hosted by the Species Survival Network during the CITES CoP, is named after the late chief of the US Fish and Wildlife Service's Office of Law Enforcement. Mr. Bavin substantially elevated the fight against wildlife crime in the United States and internationally, pioneering the use of covert investigations and sting operations to expose illegal wildlife trade and advocating for the use of forensic science to identify and prosecute wildlife criminals.

“Without individuals and agencies, like those honored this year, willing to sacrifice their own lives to protect wildlife and enforce wildlife laws,” explained DJ Schubert, AWI wildlife biologist, “the wildlife we all enjoy and benefit from would be wiped clean from our forests, fields, rivers, and oceans by wildlife criminals and criminal syndicates.”

More information about the award and this year’s recipients can be found at https://awionline.org/content/2016-clark-r-bavin-awards.

About the Clark R. Bavin Wildlife Law Enforcement Award
The Clark R. Bavin Wildlife Enforcement Award, presented by the Animal Welfare Institute, recognizes individuals, organizations, and agencies that have demonstrated excellence in combatting wildlife crime. The award is named in memory of the late chief of the US Fish and Wildlife Service's Office of Law Enforcement, who pioneered the agency's highly effective use of covert investigations and sting operations to uncover illegal wildlife trade. For more information, visit https://awionline.org/content/international-trade.