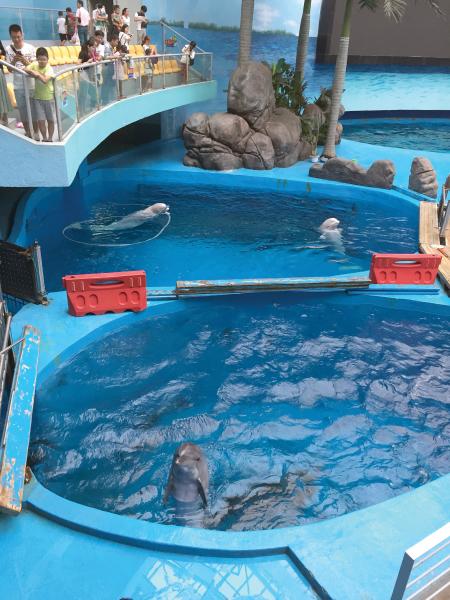 The report, entitled OCEAN THEME PARKS: A Look Inside China’s Growing Captive Cetacean Industry, aims to raise awareness of the welfare issues associated with the capture of free-ranging whales, dolphins and porpoises and their subsequent holding in ocean theme parks in mainland China.The report details the findings of CCA members, who have documented the arrival of over 250 wild-caught cetaceans into Chinese ocean theme parks since 2010.

“The rapid increase in the number of cetacean exhibits at various attractions and development projects in mainland China is alarming,” said Dr. Naomi Rose, marine mammal scientist at the Animal Welfare Institute, an organization member of the CCA, who spoke at the media event about the influence of captivity on the welfare of marine mammals. “Almost all the cetaceans on display in China were wild-caught – this is not just a welfare issue, it’s a conservation concern.”

According to the report, the ocean theme park industry is expanding dramatically in China, with 491 cetaceans suffering in mainland China’s ocean theme parks. To date, there are 39 ocean theme parks in operation and 14 more under construction, demonstrating an increasing desire among the Chinese public to see captive cetaceans.

“The welfare of captive cetaceans in mainland China is of concern,” stated the CCA in its report. “National government regulations stipulate that facilities must provide conditions that accommodate some of the basic physiological needs of captive cetaceans, but make no mention of the complex behavioral needs of these species. The living conditions within the ocean theme parks are inadequate to meet the complex physical and behavioral needs of cetaceans. Due to these conditions, many animals are likely to be suffering to varying degrees.”

Additionally, stated the CCA, “China’s participation in the live capture of free-ranging cetaceans from the waters of both Russia and Japan, and the subsequent import of these individuals, is having a negative impact on the conservation status of some targeted cetacean populations and on the international image of the country for its ability to protect wild animals.”