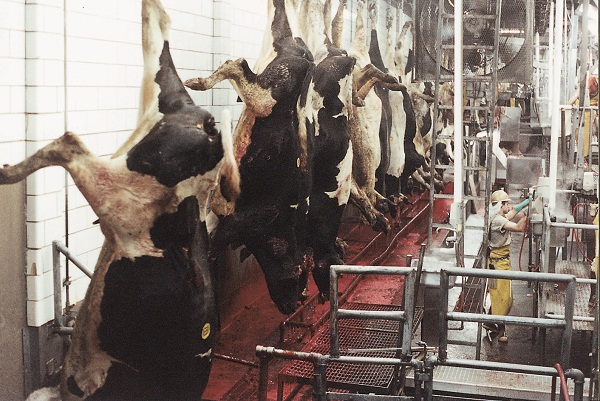 Washington, DC—The Animal Welfare Institute (AWI) late yesterday filed a lawsuit against the US Department of Agriculture (USDA) for its unreasonable delay in responding to an AWI petition—filed in May 2013—to amend the Humane Methods of Slaughter Act (HMSA) to prevent incidents of inhumane handling and the needless suffering of animals at slaughter.

AWI is asking the court to order the USDA to answer its petition, which requests that the USDA require that all slaughter establishments follow clear procedures to address animal welfare to prevent inhumane handling and slaughter. The animal welfare organization—represented by the Public Justice Advocacy Clinic at The George Washington University Law School—is suing the USDA under the Administrative Procedure Act, which requires agencies to respond to citizen petitions for rulemaking within a reasonable time.

“The USDA is shirking its duty as a regulatory agency by refusing to initiate rulemaking to amend the HMSA, particularly when many of the causes of inhumane slaughter are well known and easily addressed,” said Dena Jones, farm animal program director at AWI.

In 2013, AWI analyzed a sample of more than 1,000 of these incidents to identify the most common causes of inhumane slaughter. This review found that the most frequent causes of inhumane incidents (not adequately addressed by current regulations) are (1) lack of worker training in humane handling techniques, (2) use of inappropriate stunning devices, (3) improper shot placement, often in connection with inadequate restraint, (4) lack of routine testing and maintenance of stunning equipment, and (5) lack of a backup stunning device.

For example, in September, a federal slaughter plant in Pennsylvania was unsuccessful in three attempts to render a boar unconscious with a rifle, with the animal vocalizing after each shot to the head. The plant did not have an appropriate backup stunning device available, so one of the employees drove to his home to retrieve another rifle, returning 10 minutes later to finally put the animal out of his misery.

AWI’s petition requests that the USDA amend the HMSA regulations to address the lack of backup stunning devices, as well as the other identified causes of inhumane slaughter. AWI estimates that up to half of all inhumane handling violations could be avoided by improvements to the HMSA regulations.

“Prudence and common sense dictate that commercial slaughter establishments should not be allowed to slaughter animals unless they possess a humane handling plan, trained employees, and properly functioning equipment,” said Jones. “The USDA is well aware that these requirements are completely reasonable and would prevent a tremendous amount of animal suffering.”