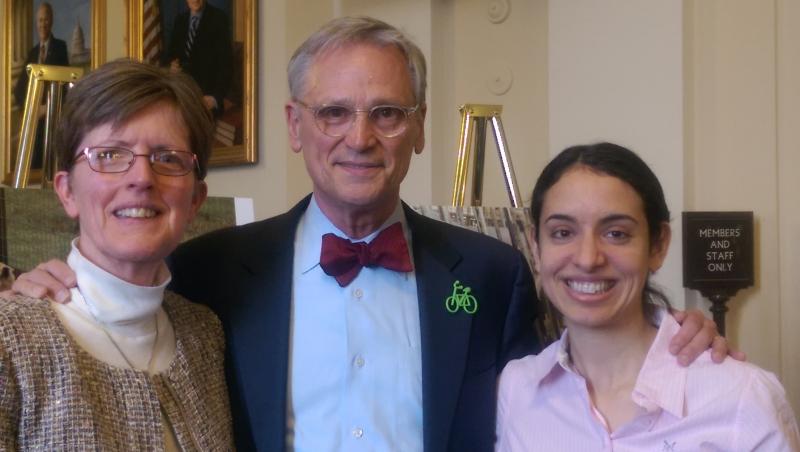 Washington, DC—The ASPCA® (The American Society for the Prevention of Cruelty to Animals®), the Animal Welfare Institute, The Humane Society of the United States, and the Humane Society Legislative Fund applaud the naming of Reps. Mike Fitzpatrick, R-PA, and Earl Blumenauer, D-OR, as the new co-chairs of the Congressional Animal Protection Caucus for the 114th Congress. The CAPC is a bipartisan caucus committed to raising awareness of animal welfare issues in Congress.

Reps. Fitzpatrick and Blumenauer have been leading champions and have demonstrated a career-long commitment to advancing animal welfare policies in Congress. The two previously collaborated to introduce legislation that would protect public health and safety by prohibiting interstate commerce in primates for the pet trade, and supported many other animal welfare legislative efforts including bills to crack down on animal fighting, protect farm animals, and save our nation’s horses from the cruelty of slaughter. As co-chairs, Fitzpatrick and Blumenauer will work with new and returning CAPC members to advance animal protection legislation in the 114th Congress.

“This Congress, I am honored to take on a leadership role in promoting animal protection alongside my trusted colleague, Earl Blumenauer,” said Rep. Fitzpatrick. I look forward to building upon the achievements of the 113th Congressional Animal Protection Caucus and continuing to foster bipartisan support for common-sense animal welfare laws.”

“I’m excited to be able to serve as co-chair of the Congressional Animal Protection Caucus,” said Rep. Blumenauer. “The way we treat all animals, whether domesticated or wild, reflects our values and has an incredible impact on the livability and vitality of our communities. They not only enrich our lives, they all deserve humane and compassionate treatment.  The Congressional Animal Protection Caucus will be a bipartisan forum to educate, encourage and organize members of Congress to be an effective, powerful voice for animal protection.”

Formed in 2009, the CAPC, through non-partisan forums and briefings, seeks to highlight important issues affecting animals. The CAPC also tracks the progress of relevant legislation, provides Members of Congress with credible information, and strives to build broad coalitions in support of common-sense, humane animal welfare laws and policies.

About the Animal Welfare Institute (AWI)
The Animal Welfare Institute (www.awionline.org) is a non-profit charitable organization founded in 1951 and dedicated to reducing animal suffering caused by people. AWI engages policymakers, scientists, industry, and the public to achieve better treatment of animals everywhere—in the laboratory, on the farm, in commerce, at home, and in the wild. Follow AWI on Facebook at http://www.facebook.com/animalwelfareinstituteand Twitter at http://www.twitter.com/AWIOnlinefor updates and other important animal protection news.

About the ASPCA®
Founded in 1866, the ASPCA® (The American Society for the Prevention of Cruelty to Animals®) is the first animal welfare organization in North America and serves as the nation’s leading voice for animals. More than two million supporters strong, the ASPCA’s mission is to provide effective means for the prevention of cruelty to animals throughout the United States. As a 501(c)(3) not-for-profit corporation, the ASPCA is a national leader in the areas of anti-cruelty, community outreach and animal health services. For more information, please visit www.ASPCA.org, and be sure to follow the ASPCA on Facebook, Twitter, and Pinterest.

About The HSUS
The Humane Society of the United States is the nation’s largest animal protection organization, rated most effectiveby our peers. For 60 years, we have celebrated the protection of all animals and confronted all forms of cruelty. We are the nation’s largest provider of hands-on servicesfor animals, caring for more than 100,000 animals each year, and we prevent cruelty to millions more through our advocacy campaigns. Read more about our 60 years of transformational changefor animals, and visit us online at humanesociety.org.

About The HSLF
Follow HSLF on Twitter at twitter.com/HSLegFund. The Humane Society Legislative Fund is a social welfare organization incorporated under section 501(c)(4) of the Internal Revenue Code and formed in 2004 as a separate lobbying affiliate of The Humane Society of the United States. The HSLF works to pass animal protection laws at the state and federal level, to educate the public about animal protection issues, and to support humane candidates for office. On the web at hslf.org.