Introduction: Most abnormal behaviors are highly individualized and idiosyncratic. Stereotypic behaviors are classified as "habitual patterns of stimulation which, by virtue of their familiarity and repetitive nature, calm the individual when input is too high or arouse it when too low" (Chamove and Anderson, 1989). Self-stimulation seems to be an exaggerated coping mechanism to combat boredom because "the chimpanzee's body and its products are among the very few objects in the restricted environment that are freely manipulable and subject to alteration" (Walsh et al., 1982).

The purpose of this study was to link the abnormal behaviors often expressed by chimpanzees living in captive environments to factors related to their care and housing. Stressful procedures and the related effects of indoor single caging are probably to blame for increased stereotypies in captive chimpanzees on research protocols (Baker, 1996).In a study conducted at the Southwest Foundation for Biomedical Research, chimpanzees in temporary isolation expressed increased abnormal behaviors (Brent et at., 1989).

The development of abnormal behaviors is strongly influenced by the early social environment and rearing history. Lack of maternal care is known to be behaviorally disruptive and causative of stereotypies (Walsh et al., 1982). It has been theorized that body rocking helps an infant compensate for the lack of motion stimulation normally provided by the mother (Capitanio, 1986).

It has also been suggested that the small amount of time that captive chimpanzees feed and forage compared to that of wild chimpanzees is responsible for the appetitive disorders of coprophagy, regurgitation, and urine drinking (Bloomsmith, 1989).Social deprivation and lack of stimulation have also been related to, the occurrence of food- and feces-related disorders (Walsh, et al. 1982).

Methods: Subjects and Housing. Subjects were 58 chimpanzees (Pan troglodytes} , 25 males and 33 females, housed in two buildings at the Southwest Foundation for Biomedical Research (SFBR) in San Antonio, Texas. All animals experienced the same routine cleaning and treatment schedules, and all were housed in indoor/outdoor enclosures in social groups of two to five chimpanzees. Two of the primate groups (10 individuals) had access to a 915 sq.m (3000 sq.ft.) outdoor playground every third week (see Brent, et al. 1991). The subjects were fed a standard daily diet consisting of fruits, vegetables, monkey chow, grains and various feeding enrichments.

The colony data base and animal records provided background information on each subject (see Table 1). Rearing histories were unknown for four of the subjects. Twenty-eight of the remaining 54 subjects spent less than three months with their mother, and were therefore raised in a nursery with human caretakers and a suitable group of peers. While all 58 subjects were housed in social groups at the time of the study, many had previously taken part in research protocols requiring indoor housing and often single caging in areas ranging from 0.92 sq.m (10 sq.ft.) to 4.65 sq.m (50 sq.ft). The proportion of each subject's life spent on research protocols was also computed.

Data Collection and Analysis: Each group of chimpanzees was observed for 30 minutes during five periods (0830-0930, 0930-1030, 1030-1130, 1330-1430 and 1430-1530 hrs.). Abnormal behavior was defined as behavior that is qualitatively or quantitatively different from the behavior of wild chimpanzees (Erwin & Deni, 1979). One-zero sampling of abnormal behavior was recorded, with abnormal behavior categories and definitions similar to those in Walsh et al., 1982. The abnormal behaviors were divided into five distinct categories: whole body movements, parts of body movements, self-directed behaviors, food- and feces-related behaviors, and group-related behavior.
Data on abnormal behavior were summarized as the occurrence or non-occurrence of any abnormal behavior in an individual and further subdivided by category and type of abnormal behavior. Point biserial correlations for dichotomous data were computed for the continuous variables (age, number of location moves, months spent with the mother, proportion of life spent on research protocols) and Pearson chi-square (or Fisher's exact test where appropriate) were
computed for the nominal variables (sex and access to the 'playgrounds). Significance was defined as p < 0.05. 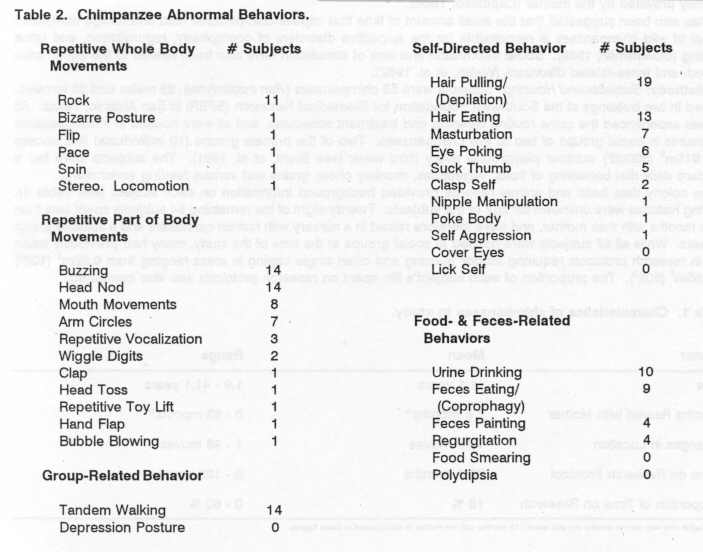 Discussion: A large number of chimpanzees exhibited at least one type of abnormal behavior. This was surprising considering that the subjects were all presently living in groups in indoor/outdoor enclosures with a variety of foods and enrichments available. However, it should be noted that the presence or absence of abnormal behavior alone may not be the best indicator of well-being (see Fritz, et al. 1992).
Although these data are preliminary and based on a relatively small sample size, several historical factors, such as early rearing history and immediate environment, were related to abnormal behavior. Individuals who spent more time with their mothers had less abnormal behavior. Deficits produced in chimpanzees removed from the mother and reared in a restrictive environment are well documented (e.g., Davenport and Menzel, 1963) , and the influence of the early environment cannot be overlooked. In addition, access to a large, enriched play area was related to fewer abnormal behavior patterns. Playgrounds may have long-term positive behavioral effects on chimpanzees, in addition to the previously reported decrease in abnormal behavior in chimpanzees who had access to them (Brent et al., 1991).
Self-directed behaviors were higher in chimpanzees who had spent more time on research protocols. This may be related to individual housing, in which behaviors previously directed towards others become directed towards oneself (Wemelsfelder, 1994). Self-directed behaviors have been reported to be higher in individually housed chimpanzees compared with group-housed chimpanzees (Brent et al., 1989).
Individual abnormal behaviors did not follow predictable patterns, probably due to the infrequent occurrence of most behaviors. Tandem walking was more common in younger subjects, but was not confined to nursery-reared individuals. A higher proportion of time on research studies was related to increased head nodding, but decreased tandem walking and urine drinking. A better sample would help to elucidate the relationships between historical factors and individual abnormal behaviors (see Fritz et al., 1996).

Acknowledgements: A. Warniment was supported through a student internship offered by the SFBR. Thanks to Amy Kessel and Humberto Barrera for their assistance.

Reprinted with permission of the Editor of The Newsletter.