The dismantling of the Animal Welfare Act (AWA) by the USDA continues unabated. The entire program—inspections, long-standing policies, and enforcement—is in shambles, leaving animals with virtually no protection. And gleaning what is happening is no small task given the USDA’s misleading pie charts, buried statistics, verbal (i.e., not documented) dictates, and anonymity granted to so much of industry. But here is what we’ve pieced together.

The New, Unimproved, Opaque Enforcement Statistics
The table below is a portion of the useful and easy to understand data regarding enforcement of the AWA from the USDA’s Animal Care Enforcement Summary, which used to be readily available on the USDA website.

*Note, the first figure in this column is from the USDA and covers the first three quarters of FY 2018 only. The second figure is the year-end data as pieced together by AWI after sifting through the data.

The dramatic decline in enforcement activity is startling, but that’s only half the story. Tracking these enforcement trends is about to get a lot harder. On April 18 of this year, the USDA’s Animal and Plant Health Inspection Service (APHIS) announced that it was revising the website for Investigative and Enforcement Services (IES) and changing the way that it will report data.

IES takes the noncompliant items documented on inspection reports and conducts investigations that theoretically lead to enforcement actions by the USDA’s Office of General Counsel: warnings, complaints, and cases brought before administrative law judges. The April 18 announcement stated, “To avoid confusion, APHIS is archiving its enforcement summaries for previous years as they cannot be readily compared to the new format.” This means that, henceforth, data will no longer be tabulated in the same way as in the table, even data that would allow a complete picture of the 2018 fiscal year.

In lieu of a table, USDA is now providing a series of pie charts such as the one below—big, colorful graphics with little useful data. The charts contain information on other programs; the sliver of pie, labeled “AC” for Animal Care, represents data for both the AWA and Horse Protection Act (HPA) combined. The “19” figure beside “AC” corresponds to the number we added to the table above, which is no longer accessible from the IES homepage. Combining the HPA and AWA data helped hide the fact that the USDA initiated no new cases under the HPA. (For more on HPA enforcement, see page 17.) And there is no longer a comparison of the most recent fiscal year with previous years, which would also clearly demonstrate the failure to enforce these laws. 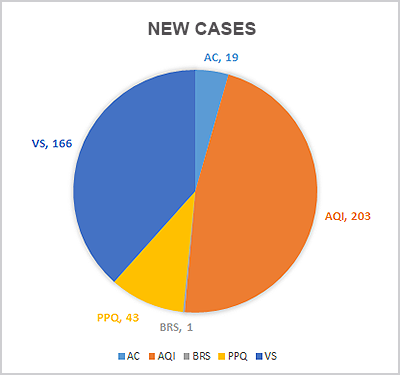 Inspection Process Upended
As noted in the spring issue of the Quarterly, the number of citations documented on inspection reports has plummeted this past year. This is likely due, at least in part, to the fact that the USDA is changing the way it monitors industry. In lieu of inspection and enforcement, the USDA made 521 “courtesy visits” to regulated facilities and 67 “compliance assistance visits,” along with providing untold numbers of “teachable moments” and “incentives,” which allow regulated entities to self-police and skirt enforcement action. The department has also shifted to conducting only partial inspections (where animals might only be observed every third year) for some registered research facilities. Inspectors are reportedly discouraged from citing noncompliances, and licensees and registrants are given ample opportunity to challenge any noncompliant items that are documented during inspections and make them disappear.

The Animal Welfare Inspection Guide has been revised as recently as March 2019, yet it is still missing the entire chapter that would provide guidance to inspectors on how to conduct “Specific Types of Inspections.” And the long-standing Animal Care Policy Manual remains “Under Review!” according to the USDA’s website, nearly a year after it was pulled from use. We anticipate that following this “review!” the policies contained in the manual will be in such a weakened state they will be ineffective as tools to clarify requirements under the law.

Search (in Vain) Tool
The appalling lack of public accountability is further exemplified by this disturbing fact: Not a single inspection report can be found via the USDA’s so-called “public search tool” for any of the respondents in the 10 AWA complaints filed from January 20, 2017, through April 30, 2019. And, since each of these 10 has been designated a “closely held business” by the USDA, the public is denied the chance to see their compliance history. This is because the administration has decided that closely held businesses—no matter their size or the seriousness of the allegations against them—have a right to stay anonymous.

The 2018 Animal Care Impact Report
The fiscal year 2018 Animal Care Impact Report was introduced on April 18 with the tagline, “Ensuring humane treatment. Serving people. Doing Right.” Just like last year, this administration’s definition of “impact” is debatable. The agency’s current pro-industry bias is clearly evidenced by what it calls “customer and public outreach”—which is really only outreach to “customers” (e.g., licensees and registrants) and not the public. Indeed, the USDA’s outreach consisted of attending over 100 “meetings and conferences” with “leaders and members of the breeder, exhibitor, research, transporters, veterinary, walking horse, and emergency response communities.” Meanwhile, the animal protection meeting that AWI has spearheaded for decades—a meeting in which AWI and various other organizations have engaged in a free-flowing dialogue with USDA personnel and expressed our concerns about AWA enforcement—was reduced from half a day to an hour and a half with very little back-and-forth exchange.

The Impact Report brags that the department distributed “detailed euthanasia guidance to ensure alignment with the AWA regulations.” What it did, in fact, was gut a policy that mandated compliance with American Veterinary Medical Association euthanasia guidelines—a euthanasia policy so noncontroversial and commonsense that it was in place, enforced, and repeatedly renewed under Democratic and Republican administrations alike since at least 1997. It was not surprising, but discouraging, to find that the word “enforcement” appears in only one sentence on the last page of the 5-page document, where the USDA describes its initiative to “better assist facilities” via outreach and education as opposed to “traditional enforcement methods.”

Inspections, enforcement, public accountability—these are the cornerstones of a 53-year-old law that has long enjoyed bipartisan congressional and widespread public support. These cornerstones are now under the sledgehammer of an administration whose only goal seems to be to shield its “customers” from their obligation under the law to provide humane treatment to the animals under their care.