BlueVoice: An Enduring Legacy for Whales and Dolphins 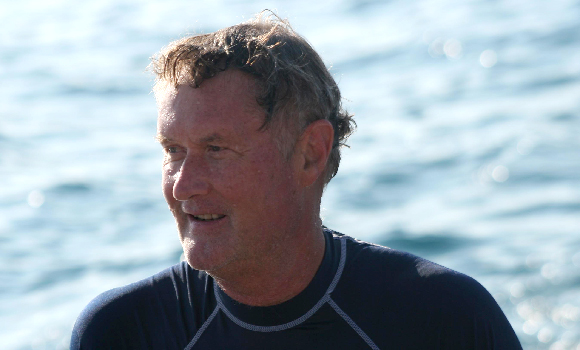 Hardy Jones: Defender of Whales and Dolphins
Hardy Jones was a videographer who used his skills behind the camera, along with his warm and kind personality, to expose the world to the beauty of dolphins and their ocean habitats—as well as to expose those who hurt and exploit them.

Hardy produced over 75 films for PBS, National Geographic, the Discovery Channel, and Turner Broadcasting System. His love of dolphins began in the 1970s when he filmed spotted dolphins off The Bahamas and got to know them on an individual basis. In 2011, he wrote a book about his work entitled The Voice of the Dolphins, which describes his more than 30 years studying and filming wild dolphins, as well as his advocacy efforts on their behalf.

Hardy’s passion for defending dolphins ultimately brought him to Japan, where several communities were deliberately killing them for meat. In 1999 he was the first person to bring international attention to the dolphin hunts in Taiji and Futo, by covertly filming the massacres, often at great personal peril.

An AWI Partnership
This work caught the attention of AWI’s founder, Christine Stevens, who agreed to support Hardy’s Japanese projects. With the help of local wildlife conservation organizations in Futo, Hardy ultimately convinced the lead dolphin hunter that dolphins were worth far more alive than dead. The result was an ecotourism project that ended the Futo dolphin hunts in 2002. Changing attitudes in Taiji has proved far more challenging, but Hardy’s work there laid the groundwork for campaigns that continue to this day.

Hardy regularly attended the meetings of the International Whaling Commission, and in his quiet yet forceful way, made clear his views against commercial whaling. He could always be relied on to join group efforts against commercial whaling and was an active member of WhalesNeedUS, a coalition of US nongovernmental organizations (including AWI) that works to protect whales.

BlueVoice
Together with actor and ocean campaigner Ted Danson, Hardy founded BlueVoice in 2000 with the aim of using film to expose threats to dolphins and the oceans and to urge action. Through BlueVoice, Hardy continued his work against the dolphin hunts in Japan, as well as in Peru, and raised awareness concerning contaminants in the oceans. He studied the impacts of red tide and associated cetacean die-offs, the intentional killing of dolphins in Peru for use as shark bait, and mercury levels in humans eating cetacean meat and blubber, including Faroe Islanders.