When changes are made to NIBRS, it typically takes a few years before all of those changes are adopted by the 16,000+ independent law enforcement agencies that report crime data to the FBI. With respect to animal cruelty crime reporting, the transition toward full adoption is still underway, but some 2017 and 2018 data on animal cruelty crimes is now available in the FBI’s crime reports. As data continues to flow in and more law enforcement agencies begin to report, it is becoming ever more possible to determine trends and obtain an accurate assessment of the occurrence of animal cruelty, where it is happening, and the characteristics of offenders.

What is an incident?

AWI played a critical role in persuading the FBI to add animal cruelty crimes to NIBRS. Once the FBI agreed to do so, we began reaching out to law enforcement, humane law enforcement, and animal control agencies to promote implementation of this new policy. AWI also helped develop tools to facilitate agencies’ efforts to comply.

We will continue to play an important role by (1) analyzing the data so that law enforcement officials and the public can obtain a clearer picture of animal cruelty in particular localities and (2) shining a light on states that have been more successful in adopting the new policy and adding animal cruelty crimes to their NIBRS reporting.

The NIBRS Animal Cruelty Reporting scorecard is one tool that law enforcement officials and the public in each state can use to see how their state is faring and how it compares to the efforts of others. 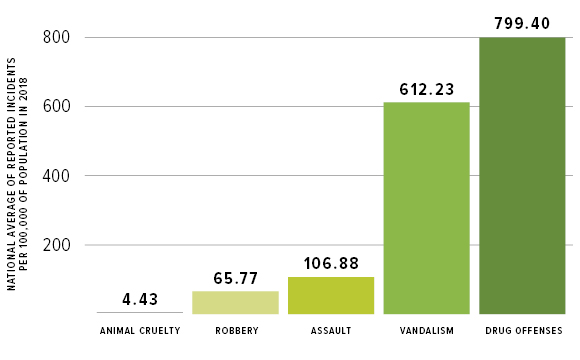 For questions about the scorecard, please contact Mary Lou Randour, PhD, at marylou@awionline.org.