The comment period is now closed. The rescheduled decision due date is April 2015. 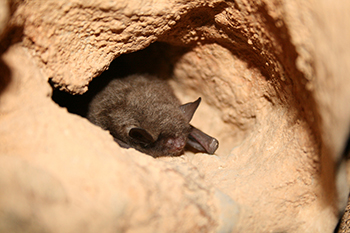 The US Fish and Wildlife Service (USFWS) has announced a six-month delay (until April 2015) in its decision whether to list the northern long-eared bat (Myotis septentrionalis) as endangered under the US Endangered Species Act (ESA). Given the extremely precarious status of this species, this is a very troubling development. It is urgent that individuals like you who are concerned about bats contact USFWS in support of immediately adding the northern long-eared bat to the endangered species list.

As you have heard from us over the past several years, white-nose syndrome (WNS) is a fast-spreading fungal disease that has wiped out nearly 6 million bats in the United States and Canada since 2006. The disease has had a particularly devastating impact on the northern long-eared bat. Here is what we know has been happening to this species:

Some members of Congress from Pennsylvania, Ohio and other states; representatives from the timber, oil, and gas industries; and even some state natural resource departments have been pressuring USFWS not to list the northern long-eared bat as endangered, claiming it would impede business. The irony is that the loss of bats is the real threat: As voracious consumers of insects that prey on crops and timber, the economic benefit of healthy bat populations is valued at billions of dollars.

Given the influence of the political forces arrayed against the bats, it is urgent that USFWS hear from individuals who recognize the importance of these mammals to our ecology and our economy and want the agency to rely on the scientific evidence in making its listing decision.

What You Can Do:
Please send your comments to USFWS via the official comments website before the August 29 deadline. Below are some suggested comments you may cut and paste into the box provided on the comments page. Feel free, however, to add other information from this alert or to otherwise personalize your message, as long as your comments do not exceed 5,000 characters total.

Please also share our "Dear Humanitarian" eAlert with family, friends and co-workers, and encourage them to send a message to USFWS too.

As always, thank you very much for your help!