Tell Army Corp of Engineers: No Dolphinarium on St. Thomas 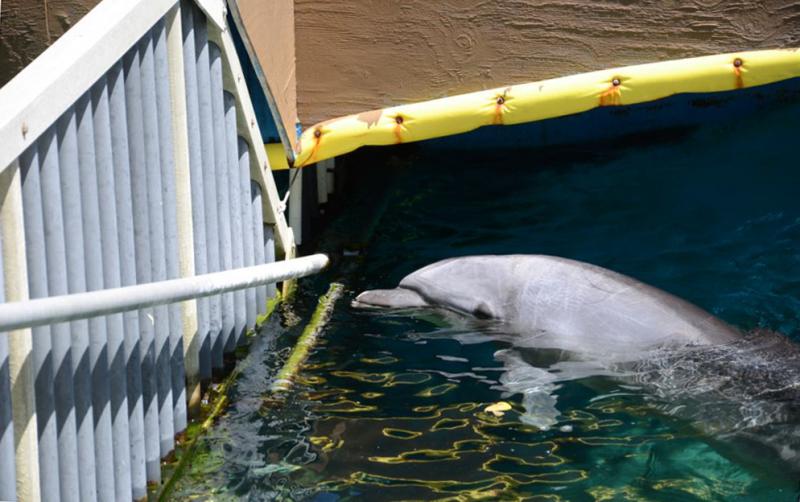 Coral World Ocean Park is an aquarium on St. Thomas, U.S. Virgin Islands, that has displayed fish and other sea life for many years. Coral World now wants to display dolphins and sell "swim-with-the-dolphin" encounters to tourists. It has proposed building a new sea pen facility in Water Bay next to the current Coral World complex. This new "dolphinarium" is where Coral World plans to house the dolphins it intends to acquire—most likely from abroad—for public entertainment. This sea pen would be located in sea turtle habitat consisting of coral reefs and sea grasses. All species of sea turtles and several species of corals inhabiting the area are listed or proposed for listing under the Endangered Species Act.

The U.S. Army Corps of Engineers (USACE) is the agency responsible for permitting the construction of this sea pen. Coral World has admitted it would need to transplant some corals (including the listed species)—always a risky action—and would damage some of the sea grass habitat, but insists there is no danger to the habitat overall. It dismisses entirely the risk posed by confining a number of dolphins in a sea pen, which may result in a decline in local water quality and long-term harm to corals and sea grasses from the inevitable effluent.

The USACE has published the permit application submitted by Coral World and has opened a public comment period of 20 days for the purpose of soliciting comments on the potential effects of the project on threatened or endangered species or their habitat. The current due date for comments is November 30. This is an insufficient amount of time for the public and other interested parties to review the application and consider the possible long-term harm this project poses to Water Bay. It also does not take into account the increasingly controversial nature of dolphin exhibits. The USACE should extend the comment period by a minimum of 15 days (resulting in a due date for comments of December 15) and should also schedule a public hearing, to allow the public ample opportunity to have its views heard.

What You Can Do:
Please write a letter (no emails accepted), post-marked NO LATER THAN November 30, to the following address, stating that you oppose the construction of the dolphinarium because it will harm the dolphins' welfare. Please say also that you consider this project controversial and that both a hearing and an extension of the comment period are warranted.

The public notice is available by clicking here.

To assist you, a sample letter is provided below. You may copy our sample, but putting it in your own words will help give your comment more weight.

I am writing to comment on the permit application submitted by Coral World Ocean Park, on the U.S. Virgin Island of St. Thomas, for a new sea pen to hold dolphins. I oppose this application because holding dolphins captive is harmful to their welfare and because of the likely adverse environmental impact to corals, sea grasses, sea turtles, other aquatic species, and to ecosystem health. In addition, this particular proposal is controversial on St. Thomas and both a hearing and an extension of the comment period are warranted. Please consider scheduling a public hearing on St. Thomas on this permit application and extending the comment period by at least 15 days, giving a new comment deadline of December 15.

Thank you for considering my views on this matter.

Please share our “Dear Humanitarian” eAlert with family, friends and co-workers, and encourage them to send a message also.

As always, thank you very much for your help!